skip to main | skip to sidebar

Contents page for the stories in this series.

This story started from several places. Initially, the first conversation between the Doctor and Saskia in the first part of the prologue, came about as the result of a silly, slightly surreal conversation I had with someone on an online forum, in which I said that my brain was on another plane and it was going to Barcelona. I can't resist puns and word play, hence the plane/aeroplane joke - and I mentioned Barcelona because I hadn't long watched again the Children In Need mini-episode and "The Christmas Invasion" episode from season 2 of New Doctor Who.

The idea of my brain being able to do things separately from my body is an old one for me - on occasion I've been known to make the same joke that Saskia makes about keeping my brain in a jar by my bed. That's the influence of Roald Dahl's short story William and Mary which my GP told me about years ago when I was lamenting my (then) frequent attacks of migraine. I asked if he couldn't just take my brain out of my head to stop it aching - and he told me of this story, which I then tracked down in the collection Kiss, Kiss

This story was also inspired by Mark Gatiss' season 1 episode "The Unquiet Dead" and by Susan Cooper's fantastic novel, King of Shadows

, in that in both stories a character meets a writer whom they admire. That was the inspiration behind the meeting that the Doctor and Saskia have with the two literary figures who appear in Chapter 3 (though neither the Doctor nor Saskia is actually a fan of either of those writers !)

I used to watch Doctor Who when I was a child, although I was never a devoted fan - and in fact, when the new Russell T Davies series started, I was a bit sceptical about it. My brother taped "Rose" and "The End of the World" (featuring the 9th Doctor played by Christopher Eccleston) for me and I was completely unimpressed. I was expecting Rose to be a Buffy-esque character, and initially she's not. So I lost interest. But people (including my oh-so-persistent brother) kept telling me I should give it another chance, and after my sister got the season 1 boxset for Christmas 2005, I borrowed the DVDs and watched them - and to my surprise, I was hooked. I confess, I find Christopher Eccleston's Doctor a little too smug at times about how clever he is - and I am very conscious of Eccleston acting the role. David Tennant, on the other, is a lifelong fan and he *plays* the role, he inhabits it totally - which makes for a mostly more light-hearted Doctor - which also means that when he's steely, it has a bigger impact, I feel. And David Tennant so impressed me in the role of the Doctor that I started looking out for other films and shows he had done - so not only am I New Doctor Who fan, I'm also a David Tennant fan as well.

This story is dedicated to the team at BBC Wales, who've done such a good job of re-inventing "Doctor Who" for the 21st century, and to David Tennant, who inspired me to pick up my pen and seriously attempt to write fiction for the first time since I was 10. Thanks !

This second "Doctor Who" story is a sequel to New Companion, Old Earth - the new story opens only a short time after the first one closed, and it sees the Doctor, Saskia and the Devron arrive on Saskia's homeworld of Einfuhlung.

The idea of the Lost City of Eupatoria out in the desert of Einfuhlung came from a very vague recollection I thought I had of reading a story some time ago, about some travellers in a desert area where the wind had sculpted rocks into formations that looked like a city; they then travelled through time and found it really was a city. Much asking around my fantasy-reading friends elicited a number of suggestions of what the story was, but none of them were actually a story I'd read ! So I gave up trying to find it and wrote my own...

I felt more confident about writing both the Doctor and Saskia in this second story, and I hope that shows. I think it's a stronger story than the first one, it's certainly darker (I think), especially the fourth chapter.

This third "Doctor Who" story is a sequel to the first two, and picks up the story shortly after Saskia and the Doctor left her home planet. The idea came from something I read in Paul Parsons' The Science of Doctor Who

and it brings the Doctor and Saskia back to our Earth, a few years in the future from us. Ostinato is an Italian musical term. It means a short melody or pattern that is constantly repeated, usually in the same part at the same pitch.

The idea for this fourth "Doctor Who" story came to me whilst I was in the middle of writing the third one. The basic idea unfolded in my head one night, just as I was going to bed, so I stopped to scribble it down as the synopsis to the story. The writing of it turned out even darker than I anticipated - so dark, in fact, that were this a TV episode it would be at least a certificate 15, so be warned! The story shows that actions have consequences, sometimes very unexpected consequences, and it links directly back to the events at the end of the second story, bringing Saskia and the Doctor back to her home planet.

The first draft of this story was written in four days flat, over the Easter weekend, making it the fastest piece of writing I've ever produced - but then the story had been burning in my brain for neary two weeks before I began writing.
Posted by Michele at 13:00 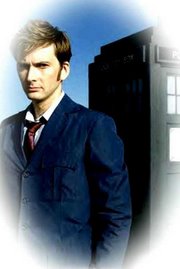 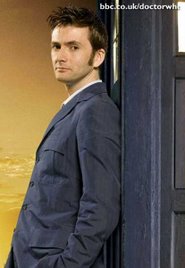 The 10th Doctor and TARDIS

Comments on this Blog

I welcome comments from readers, but this is my blog, so I reserve the right to delete any comment that I feel is inappropriate, including those that use offensive or abusive language, are spam, advertising, trolling, flaming or personal attacks. Be aware that comments are moderated for these reasons so your comment won't appear immediately.

If you want to leave a comment, please "sign" it in some way - putting your nickname or user-name is acceptable. What I will no longer tolerate is anonymous comments that abuse me. Have the courage of your convictions if you're going to criticise me and admit who you are. Anonymous comments that accuse me of creating a Mary-Sue character and living out my fantasies will definitely not be posted.